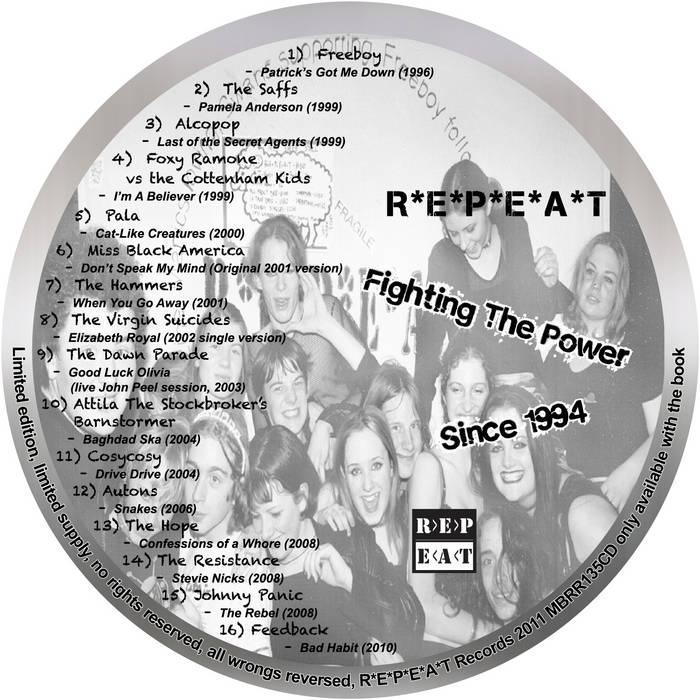 A Compilation of some of the best tracks released by R*E*P*E*A*T between our first split single in 1996 and 2010. The CD was free with initial copies of Book, MBRR135

Freeboy – Patrick's Got Me Down (1996)
Our first ever release, on a split 7' single with hand stamped labels free with R*E*P*E*A*T #6, played by Radio 1 and reviewed nationally, making this record label lark seem far too easy.


The Saffs – Pamela Anderson (1999)
The anthem for a generation of 1990s Cambridge Glitter Punks, the song that established R*E*P*E*A*T in the minds of the music loving kids of Cambridge.


Alcopop - Last of the Secret Agents (1999)
Formed in a music therapy session, Alcopop had it all - Huge choruses, Melody Maker interviews, Radio One plays, a Steve Lamacq single of the week, rock star behaviour and wonky keyboards, as encapsulated in this Bond Theme that never was.


Foxy Ramone vs the Cottenham Kids – I'm A Believer (2001)
Featuring Rosey R*E*P*E*A*T, this version (which appeared on the rarely equalled 'Histon' compilation) is better than the one on Shrek. Allegedly.

Miss Black America – Don't Speak My Mind (Original 2001 single version)
Long term allies MBA instantly understood what R*E*P*E*A*T was all about; they got Radio One sessions, NME rave reviews, John Peel Festive 50 entries (entirely without cheating!) and signed to a bigger label. Their Adrenaline Junkie Class A Mentalist ep was our first recording to sell out before it was released, a feat yet to be R*E*P*E*A*Ted. This track (later re-recorded for the Integrity Records album) appeared on the very rare Dental Records split single with the similarly fantastic Antihero.


The Hammers -When You Go Away (2001)
This track got the band a slot playing live on Blue Peter in front of 6 million people, still R*E*P*E*A*T's only terrestrial TV appearance. It may embarrass them a bit now but when they recorded it, aged 11, they played themselves to sleep with it.


The Virgin Suicides – Elizabeth Royal (2002 single version)
The teen punk band that had the Cambridge Scenesters seething, - still big sellers on I tunes today, this track appeared on the Republican Red 'Fuck the Jubilee' single.


The Dawn Parade – Good Luck Olivia (live John Peel session from Maida Vale, 2003)
Part Richey Manic, part Bruce Springsteen, this incredible recording (from the 'Best Of' compilation) shows why the Dawn Parade were always a band close to (the hole in) our hearts.


Attila The Stockbroker's Barnstormer – Baghdad Ska (2004)
Attila has been a long term inspiration and friend of R*E*P*E*A*T, so we were delighted to be able to release a this anti war track by him on lovely white vinyl, shared with the equally outspoken Bomb Factory.


The Hope – Confessions of a Whore (2008)
The Hope walked it like they talked it a lean, mean, sleazy onslaught of noise, energy, melody, anger and attitude taking aim at apathy and acquiescence. No wonder R*E*P*E*A*T was fond of misquoting Orwell - “if there's any hope, it lies with The Hope”.


Johnny Panic – The Rebel (2008)
Our first ever vinyl picture disc shows why Johnny Panic deserve to be the biggest band in the world.


The Resistance – Stevie Nicks (2008)
A trashy piece of cut'n'paste pop genius. Just like R*E*P*E*A*T. Pressing plant problems means this was never properly released, so here it is now.