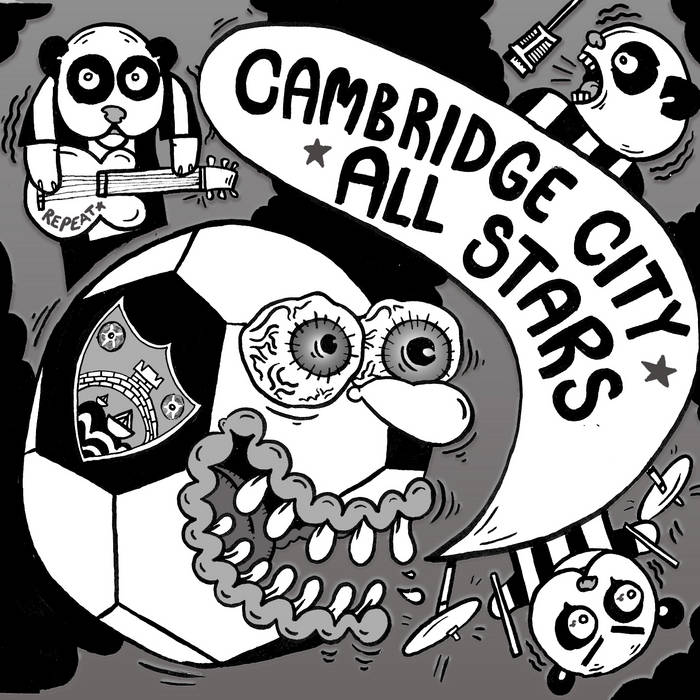 City On Song – On and Off the Pitch

A new 3 track CD release in praise of Cambridge City FC is being released on Saturday, 16th April.

The lead track on the punk-inspired disc, ‘Cambridge City Superstars’, is based on the infamous 'Banana Splits' song, a massive hit for the Dickies in 1979. The song is given a good kickabout and a reworking by a mysterious collective known as the Cambridge City All Stars. The song features a commentary from BBC Cambridgeshire’s Andy Abbott describing a spectacular City goal.

Veteran Cambridge underground record label R*E*P*E*A*T Records has released the CD in order to raise funds for City’s football in the community projects and to help finance the maintenance of their much loved Milton Road stadium. The tracks were written and recorded by R*E*P*E*A*T founder and City fan Richard Rose at the label's own Big Badger Recording Studio in deepest Arbury. Rose (aka Rosey R*E*P*E*A*T) commented:

“I can't tell you who's in the band, but I do know that several local indie and punk stars of present, past and future bands have played their part.

‘Cambridge City Superstars is a great singalong tune. The second track 'Tubthumping' [a 1990s No. 1 for Chumbawumba] epitomises the fighting spirit of the City fans, players, volunteers and directors in their many recent battles with adversity.

The final song is a downbeat acoustic number [title?] whose teasingly catchy refrain underlines the point that while City may not be a big Club in any conventional sense, it has a huge place in the heart of all its fans.

The CD release is not the end of the matter - a video will soon be available on YouTube.”

With Cambridge City’s promotion campaign well and truly on track - the Club are third in the Zamaretto League Premier Division, two points off the top with four matches remaining - the CD gives City a chance of rising up the pop charts as well as the non-league pyramid.