by The Dawn Parade 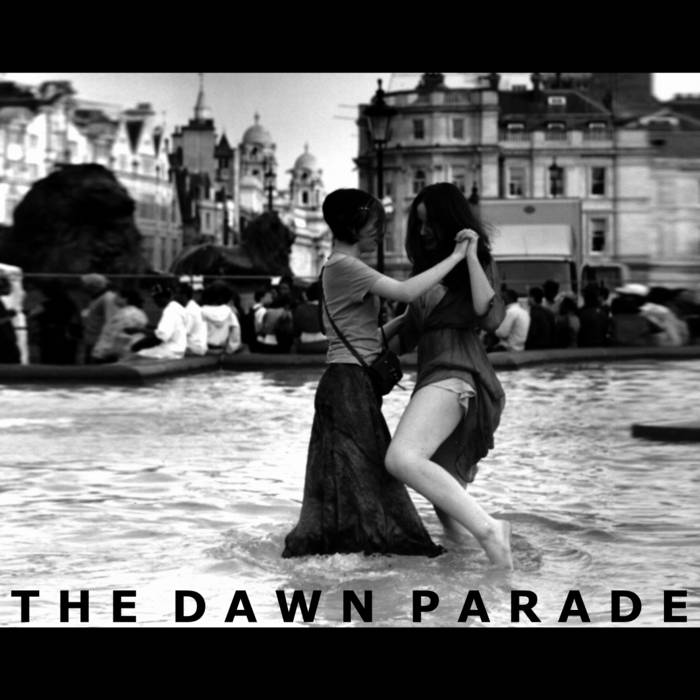 “The Dawn Parade”, an eighty minute album comprising most of cult indie four-piece and Peel favourites The Dawn Parade’s singles and their never-released debut album, is available now on R*E*P*E*A*T* Records. Between 2001 and 2005, The Dawn Parade won a cult following, gigging tirelessly in the UK and America, recording sessions for John Peel, receiving Single of the Year awards from Rolling Stone for 500-run self-releases, and recording a never-released debut album Rocksound called “Impeccable”.  The band briefly changed their name to “The Visions” at the end of 2005 before calling it a day.

The Dawn Parade’s outsider aesthetic was captured from the start in their name, the phrase beginning life as front-man Greg McDonald’s high school gang’s term for the walk back to the Suffolk village where they lived as the sun came up on Sunday morning after they’d spent Saturday night’s taxi fare in bars in the nearest town.

Initially formed by McDonald and school friend Nick Morley, the band survived street punch ups, car crashes, death threats – some made anonymously on the internet, others by band members’ mothers - and even press stories of the band’s involvement in downing a plane, to release their first single, “Good Luck Olivia” in 2001.

Featuring Nick Morley and Rob Brown on guitars, Barney Wade on bass and Ben Jennings on drums, and self-released on Sugartown Records, a label McDonald invented on the back of a beer mat in reference to Bury St Edmunds’ sugar beat factories, “Good Luck Olivia” was championed by John Peel and Steve Lamacq on Radio One, and with fans imitating the band’s tacky “gutter-glam” image and fan sites springing up online, by the time of their first tour dates supporting Miss Black America in February 2002 The Dawn Parade were well on their way to cult status.

Over the following year The Dawn Parade would help create East Anglia’s “A14 Scene”, typified by a DIY ethos, along with bands like Miss Black America, Antihero, The Exiles, El Spoonio, and The Secret Hairdresser, and promoters like Cambridge’s R*E*P*E*A*T*, Ipswich’s Blank Generation, and Bury St Edmunds’ Sugartown.  In 2002 Rolling Stone even short-listed Bury St Edmunds for “Cultural Capital of the World.”

On the summer 2002 UK tour to promote follow up single “Hole in my Heart” – released on Cambridge indie label R*E*P*E*A*T* - The Dawn Parade’s VW Camper van was looted on a Leeds side street, with the wardrobe amassed from East Anglia’s charity shops lost.  “Next morning we drove around Leeds in dejected silence,” says Greg McDonald, “looking for a gang of thieves decked out in second hand winkle-pickers and pink velvet jackets, but they must have been targeting another city that day.  We were living on hot chocolate stolen from motorway service stations at the time, and that night I traded Barney my last pair of pants for a beer to drown my sorrows about the winkle-pickers.  Stylistically, we never recovered.”

But the hundred-gigs-a-year approach paid off, turning the band who once boasted of being “never knowingly underdressed or over-rehearsed” into a live tour-de-force, never more so than on “Some Desperate Beat”, with which they opened their first session for John Peel a month later.  By now playing Sony showcases, selling out self-released single and finest moment “Caffeine Row”, and packing out gigs in Cambridge, when Rolling Stone writers Jason Cohen and Mike Krugman made “Hole in my Heart” their Single of the Year, the misfits from Bury St Edmunds appeared poised for a fairytale success story.

But by 2003 the band had gigged itself into the ground and in June they imploded.

Darker edged new single “Strung out on Nowhere” was never released, and the line up’s last recording proved to be their second Peel Session, aired live from BBC Maida Vale Studio 4 on the 5th March 2003, featuring sets from The Dawn Parade and fellow Bury St Edmunds band The Exiles, later remembered in Peel’s memoirs for defining the scene he called “the new Seattle”.  A celebratory encore of “Good Luck Olivia”, with McDonald yelling “long live the A14” over a wall of white noise would prove to be The Dawn Parade Mk I’s epitaph.

Over the next six months McDonald put together The Dawn Parade Mk II, with Jeremy Jones on guitar, Mark Sewell on drums, Neil Rayson on bass, and Claire Pruden on backing vocals, for the line up’s first act, recording a new McDonald song inspired by the previous two years’ scrapping for fame, “The Fortune Line.”

But it wasn’t until the addition of Steve McLoughlin on bass, and a gig in Wigan in October 2004, second on the bill to a local act whose friends took exception to The Dawn Parade’s image, that the new band found its feet.  “It was an intimidating atmosphere,” McDonald remembers, “and during the last song I walked into the audience with my guitar and shook hands with someone to say thanks for listening.  When I turned around, the singer from the headline band was kicking my effects pedals off the stage, and all our CDs had been smashed.  It felt like a real band again.”

In March 2005, The Dawn Parade, now living together in Cambridge, flew to Texas to play the South by South West festival, before decamping to a Welsh valley with sometime Radiohead producer Chris Brown to record a debut album which broke with the raw guitar backdrop of early singles to work an epic, string-laden new sound.  Comprising live favourites such as Wider than the January Skies, which one hardened NME hack would call “one of the few songs that makes me cry”, alongside wryer new songs like “Morrissey’s Tongue”, The Dawn Parade had finally made the debut album which, for Greg McDonald, had been “the point of life since I was fifteen.”

But despite their new sound, The Dawn Parade Mk II were unable to shake off the “band that blew it back in 2003” tag, and in September 2005 changed their name to The Visions.  Radio 2 play, 6music sessions, great reviews, and headline appearances at Cambridge Junction followed, but the “Visions” aesthetic never sat happily, and by August 2006 McDonald felt that, “We’d gigged the Dawn Parade set to death, “The Visions” was a compromise everyone hated, and I couldn’t write a “Visions” song - we were boring ourselves, and everyone could see it was over.”  The band split on friendly terms, and Greg McDonald has no regrets.  “The Dawn Parade was my life – I wouldn’t have missed it for the world, and I didn’t.”

The Dawn Parade story has a postscript courtesy of R*E*P*E*A*T* Records' founder Richard Rose, whose reaction was to suggest a Dawn Parade collection be made available through R*E*P*E*A*T*'s Big Badger imprint. Formats including everything from a three hour double CD to simply releasing the debut album with its original cover were toyed with, but in the end Richard and Greg opted for a "kopylefted, all rights-reversed" best-of collection with as much music as could fit on one CD to encourage copying. "The Dawn Parade's first ever Cambridge gig was at a R*E*P*E*A*T night, at which they played to 3 people - 2 friends and a soundman!" says Richard "and although this release is tinged with the regret of what might have been, I'm incredibly proud to be involved with an album of such sweeping, epic romanticism and beauty".