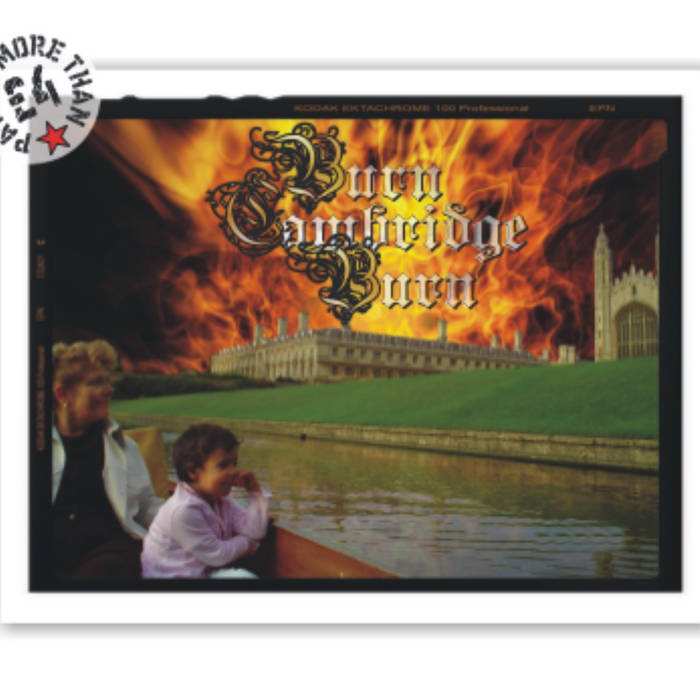 None of whom feature on this CD.


Burn Cambridge Burn is a reaction against the somewhat cliquey, self celebrating but still deciedely average music scene of our city. It was sparked by the hugely outraged reaction to a piece in R*E*P*E*A*T Fanzine which had concluded:


I don't believe in this climate of distrust of Blair and indeed all politicians, disgust at his war and alienation from mind dulling work and brainless education, that there aren't kids in bands who want to express this anger.

Surely not everyone in bands in Cambridge wants to get stoned, sing about their girlfriends and their ganga and end the set with their mates dancing on stage with them?


Surely someone has something they want to say?


This piece was seized upon by the local paper, which ran it under the headline 'R*E*P*E*A*T says local bands are boring'; this sparked a furious reaction amongst the local indie glitterati, who pretty soon had local message boards heaving and crashing under the weight of their self righteous ruffled feathers - 2000 posts were left on one local message board in under two hours, with R*E*P*E*A*T well and truly in the local dog house!

Another plus was that local bands who did want to kick over the musical statues got in touch with R*E*P*E*A*T, and this 5 band compilation is the result.

Anti-Social Burn-Outs are the sort of band Cambridge is desperate four; young, loud, tattooed, snotty and punk as fuck, they recently beat Towers of London in a fight and stole their haircuts and riffs; Cosycosy are long time allies whose shambolic girl-boy vocals have never managed to fit in anywhere on the local scene; The Hope are that rarity - a dirty, growly, riffy rock'n'roll band that dares to talk about politics, class, race, sex and burning shitty little cities; The Khe Sanh Approach spouted furious poetry like a more crazed Mark E Smith (sample couplet "They starred in their own eyes / In Che Guevara merchandise") backed by furious trebly guitars - until they imploded under the pressure of being the most unfashionable kids in the riot; and Bomb Factory, whose venom-spitting, boffin sampling punk-poetics gave the collection its name, despise the Cambridge scene so much they declined to go on the compilation - hence its inclusion as a secret bonus track.

This 12 track CD is being sold as a four way split single, and should cost no more than £4 from shops, the bands or direct from the Repeat website.